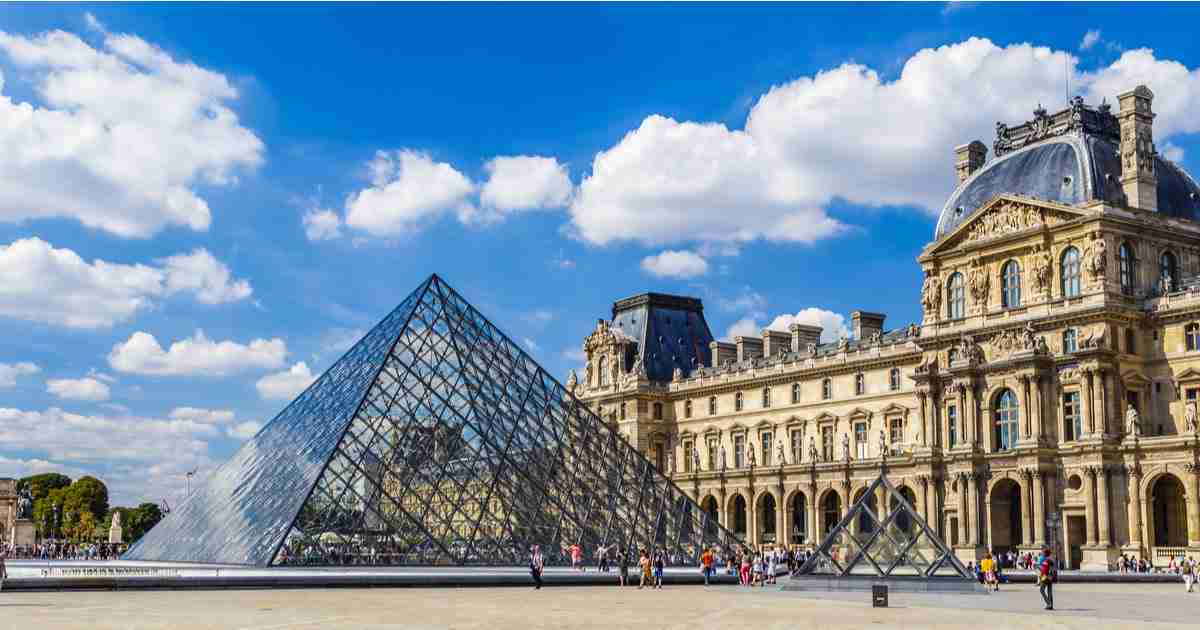 When you think about Paris, the second monument that comes to mind (after the Eiffel Tower) is the Louvre Museum, this world-famous glass pyramid-shaped museum located in the middle of impressive Parisian buildings. We have all seen the pictures, but what exactly is this museum ?

The Louvre Museum is a former Royal Palace of Paris that was converted into a great museum after the French Revolution. It has been a house of art, first under the patronage of royalty, and then the republic for long centuries.

The Louvre Museum of Paris presents one of the best and richest collections of the world which is displayed at one of the most glorious building complex. The artifacts and works inside bring many civilizations from different ages and regions of the world together.

With close to 10 million visitors each year, the Louvre Museum has earned his title of the most visited museum in Paris obviously, but also in the world, followed by the National Museum of Beijing in China and the Vatican Museums.

On this plage, we will go through all the useful information you need to know about the Louvre Museum of Paris : Exhibitions, tickets, tours, history... Continue reading and learn about this landmark of Paris.

What can I do in the Louvre Museum of Paris ?

First, we recommend that you just enjoy the vast collections of the human civilization as much as you can ! But you better know that trying to see everything inside takes few weeks, and we are sure you don't have that much time ! So you need a plan to follow inside and a list of things to see inside. We created one for you below.

The most famous part of the Louvre Museum is the Renaissance department including Leonardo's masterpiece Mona Lisa. Beyond that, the entire panting collections, namely the French, Spanish and Northern paintings are definitely worth to see.

The works of French masters, such as Delacroix are going to make you dizzy while walking. We recommend you to awe at the journey of art that is displayed well on the walls of the Louvre.

No one should miss the Antiquities ! The ancient Egyptian and Greek departments are filled with thousands of years old works. There are several masterpiece level statue like the Victory of Samothrace or Venus de Milo. Moreover, the life along the river Nile is exhibited astonishingly. The mummy in a perfect shape stuns the visitors about the concept of afterlife.

Some of the oldest written monuments and documents are taking you back to the cradle of civilization in Mesopotamia. Particularly, you can find the earliest the law codes of history inside.

Famous Paintings not to miss at Louvre Museum :

Here is the list of paintings you should absolutely see at Louvre Museum :

Remarkable Statues not to miss in Louvre Museum :

The Pyramid of Louvre

In 1981, the architect I. M. Pei created a glass and steel pyramid structure to help organize and cope with the increasing number of visitors the museum was experiencing daily.

The pyramid represents a modern touch, which contrasts the scene surrounding it.  Be that as it may, unlike a building, this transparent and reflective addition still underlines the beauty that encompasses it.

The only way in and out of the museum is underneath the glass and steel pyramid.  It is where the crowds are usually looking for the entrance. The lobby, cloakrooms, cafes, and shops are all located under the structure. Alternatively, the staircases located on both sides of the Arc de Triumph du Carrousel are usually not busy. They lead to the same lobby area underneath the pyramid, as well.

Under the pyramid, there are separate escalators to enter the three different wings of the museum. You can choose the wing with which you would like to start and move on to the other wings through the connections on the upper floors. Otherwise, you can come back to this area and access another wing from here, too.

Tickets & Tours for the Louvre Museum

Currently, everybody has to buy the tickets with a certain time slot in advance. Your have 4 options of tickets to the Louvre Museum :

We highly recommend you the second option that will make you visit the best of the Louvre Museum without losing time and thanks to the guide, you will really feel like your experience was qualitative.

If you can spend more time around the Louvre, you should couple this visit with the Orangerie visit, which is located at the end of the Tuilerie Park, close to the Louvre. It is recommended to do them the same day and to buy tickets in advance too.

When is the best time to visit the Louvre Museum ?

The Louvre usually gets more crowded after 11:00 and remains so until 16:00 in a regular day. This is why, we offer early morning hours or late afternoon hours if you want to have a quick tour through this impressive collection.

On the other hand, if you are willing to take a long and deep excursion, look for a Wednesday or Friday when the Louvre closes late at 21:45. That makes some hours of a satisfactory walk inside the museum possible with not much of people.

It is no surprises that Saturdays are the most popular day of the week.

Tips for the Louvre !

The Louvre could be entered only under the pyramid. Once you are under this glass cage, there are three wings of the Louvre and you can start with any of them you prefer. At this point, remember that everybody needs a plan before they go to the Louvre ! Make yourself a treat and book a Qualified Guide for Tour of Louvre Museum.

History of the Louvre Museum

The history of the Louvre goes back to the 12th century when a fortress was built and next to the walls of the city by the orders of King Phillipe August. Along with the expansion of the city of Paris in the 14th century, this area was preferred for the new royal residence in following centuries.

The first buildings were replaced by a renaissance style palace partly you see today in 1520s. It was King François I, who created not only the architecture but also the royal patronage for artists that includes Leonardo da Vinci from Florence.

Even when the royal family moved to Versailles Palace in 17th century, the artists' quarters remained inside the Louvre. Finally in 1793, one of the buildings with 537 paintings inside was transformed into a public museum by the revolutionary committee. Moreover, the French artists continued to produce, exhibit and preserve their art that is still there today.

The rise of archaeology and massive excavations in the 19th century added a great volume to the collections of the Louvre Museum including ancient statues, artifacts, freezes and many more. So the ancient Egyptian, Mesopotamian, Greek, Hellenic, Roman departments emerged in time. In the 19th century the long expansion buildings at the western part of the Louvre today.

The last big change happened in 1980s when the glass pyramid and the new entrances were constructed. The new design dramatically increased the visitor capacity of the complex. Eventually, the Louvre Museum of Paris has become the best stage for art and history of the world.

Guide to the Orangerie Museum in Paris: Tickets & Exhibitions

Facts about the Louvre