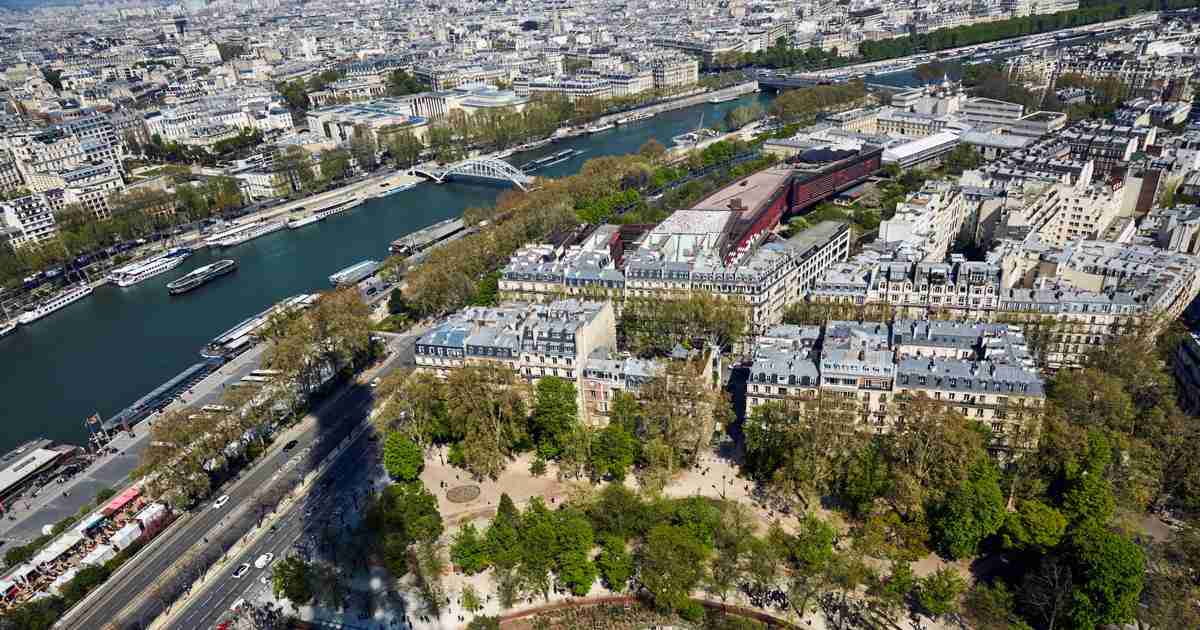 Located in the 7th arrondissement of Paris, along the quai de la Seine, the Quai Branly Museum or Jacques Chirac Branly is one of the top museums in Paris. With its outstanding collections, it pays tribute to the art and civilizations of Africa, Asia, Oceania and North and South America. It is considered the Parisian home of art from non-European civilizations in the French capital. The project, initiated by Jacques Chirac and directed by Jean Nouvel, was inaugurated in 2006 and hosts every year 1,5 million visitors.

In this article, we will be your guide and give you all the useful informations you need to know before discovering the Quai Branly Museum in Paris, including exhibition highlights, history, tickets, tours and information on how to get there.

table of contents
1.
What can I do at the Quai Branly
2.
Entrance, Tickets and Tours
3.
How to get there
4.
FAQ (Frequently Asked Questions)
5.
History of the Quai Branly
6.
Contact

What can I do at the Quai Branly Museum in Paris ? 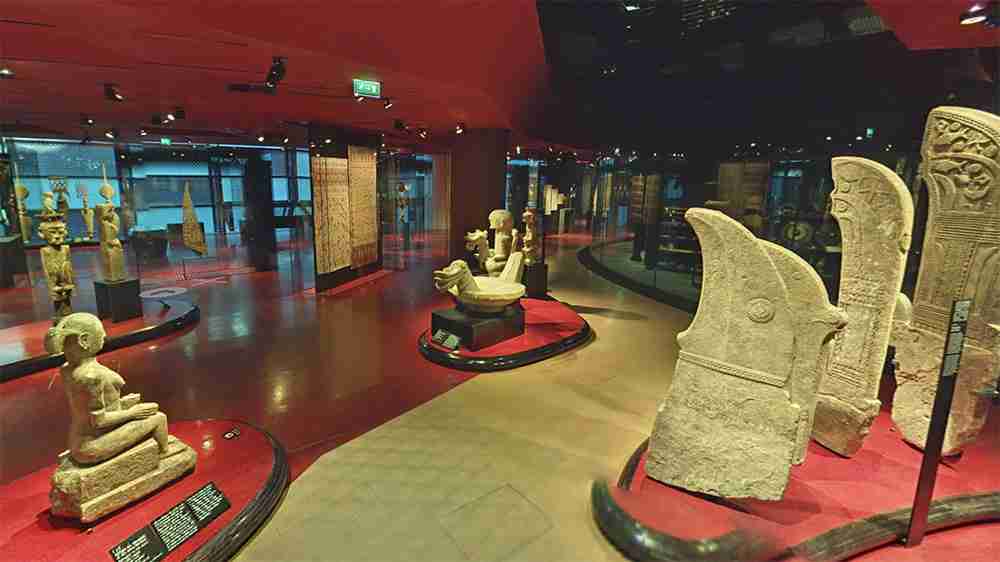 The Quai Branly Museum presents non-European art, in particular works from African, Asian, American and Oceanic art and culture. For this purpose, the ethnological collections from the "Museum of Man" (Musée de l’Homme) and the former, later renamed Colonial Museum (Musée national des arts d’Afrique et d’Océanie) were brought together.

The Musée du Quai Branly occupies a special position among the museums in Paris. What is special is that the museum does not present its collection according to aspects of ethnology, but instead emphasizes the artistic statements of the objects and offers a variety of points of view.

The museum's entire holdings include over 300 000 exhibits, including ethnological art objects such as masks, sculptures, paintings, jewelry and textiles, as well as visual and audiovisual objects and documents.

The permanent exhibition is located in the 200 meter long main gallery of the museum.

In the exhibition, 3500 selected objects from the rich inventory are on display, which are divided into the four geographical areas of Oceania, Asia, Africa and America. In order to show the rich and diverse collections in the best possible way and to protect sensitive objects, these exhibits are constantly being replaced.

The exhibits are presented on both sides of a central aisle that resembles a river. Strategically placed themed rooms and boxes draw the visitor's attention to a specific region or work.

The Musée du quai Branly also has an auditorium, a reading room, a library and a media library.

Special exhibitions on various topics take place regularly in the museum, offering a new perspective on non-European cultures. The museum tries to create a dialogue between cultures.

For an up-to-date overview of the temporary exhibitions, please consult the Quai Branly Museum's Official Website.

The museum sees itself as a living place that teaches us to better understand the current world. Numerous performances, film screenings, discussions and concerts contribute to this. An overview of the upcoming events is available on the museum's website.

In the heart of the museum complex there is an idyllic park and a green wall that shields the much-frequented Quai Branly embankment street. The hilly garden covers two hectares and is home to over 150 different plant species. Curved trails and cobblestone paths invite you to take a walk. 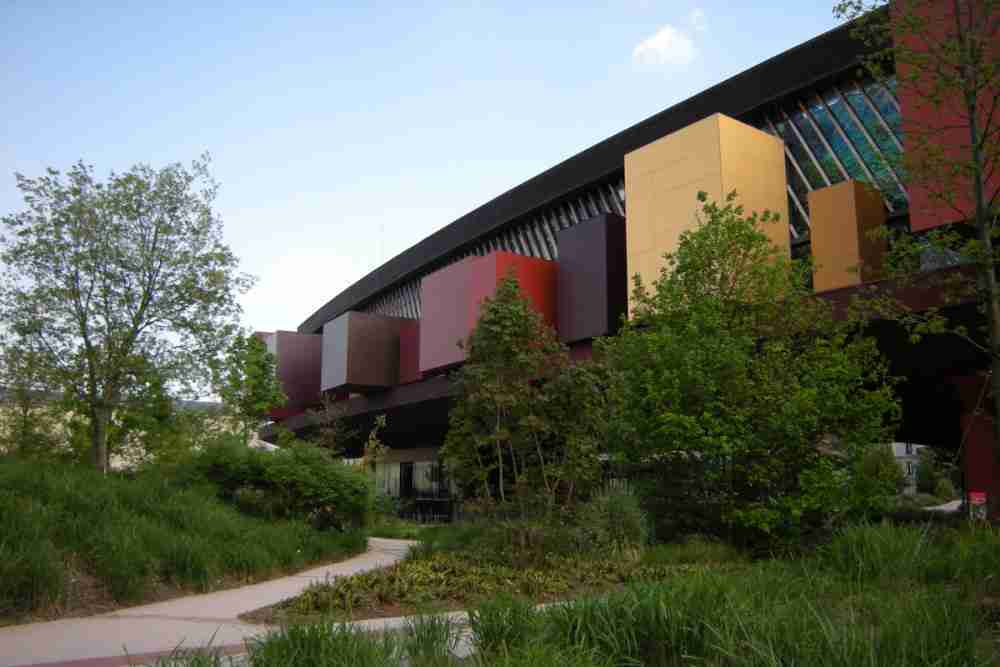 In the panoramic restaurant Les Ombres, visitors can take care of their physical well-being. It is located on the roof terrace, which offers a wonderful view of Paris.

The terrace of Café Jacques with a view of the park and the Paris Eiffel Tower is ideal for lingering over a coffee and a delicious meal.

In the museum's bookstore, a variety of souvenirs and books are on sale, which have been thematically coordinated with the four continents. The handicrafts, including jewelry, toys, clothing and decorative objects, were made according to the principles of fair trade.

How to get to the Musée du quai Branly

The museum is located in the heart of Paris, in the 7th arrondissement, between the Eiffel Tower and the Orsay Museum.

It can be reached after 500 meters from the Eiffel Tower. If you travel by public transport, the easiest way to get to the museum is to take bus number 63, 80 or 92 to the “Bosquet - Rapp” station and walk four minutes to the museum.

Alternatively, you can also take metro line 9 to "Alma-Marceau" and then walk eight minutes to the Musée du quai Branly. 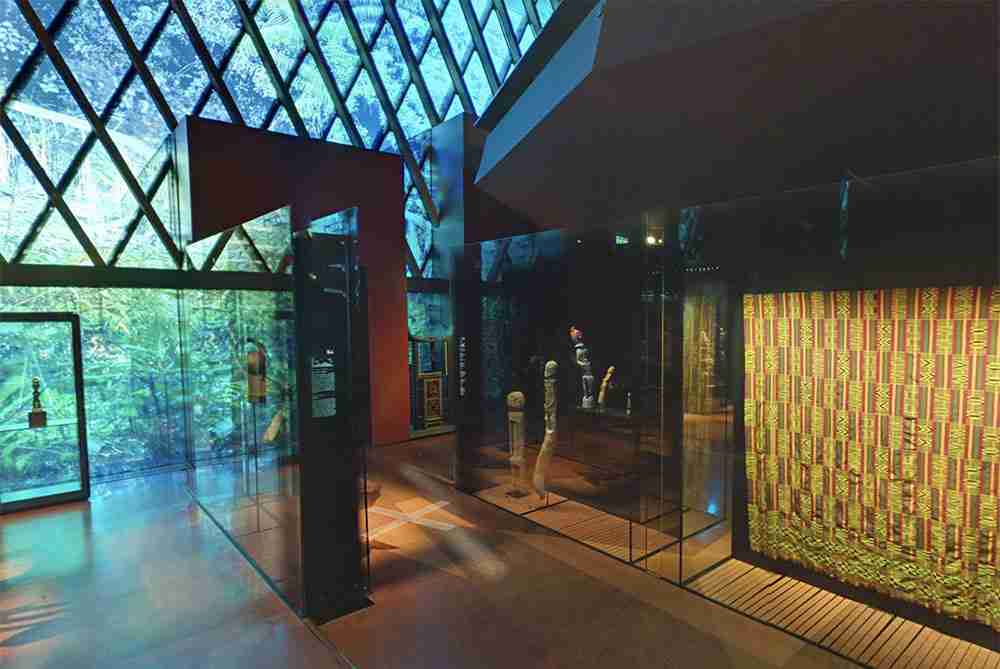 Where is Quai Branly Museum ?

The Museum du quai Branly is centrally located in a building designed by the famous architect Jean Nouvel in the 7th arrondissement of Paris between the Eiffel Tower and the Musée d'Orsay. The address is: Musée du quai Branly, 37, quai Branly, F-75007 Paris

How do I get to Quai Branly Museum ?

The Musée du quai Branly  can be reached after 500 meters from the Eiffel Tower. If you travel by public transport, the easiest way to get to the museum is to take bus number 63, 80 or 92 to the “Bosquet - Rapp” station and walk four minutes to the museum. Alternatively, you can also take metro line 9 to "Alma-Marceau" and then walk eight minutes to the Musée du quai Branly.

What are the opening hours of Quai Branly Museum ?

The regular opening times of the Musée du quai Branly are: Tuesday, Wednesday, Friday, Saturday and Sunday from 10:30 to 19:00. Thursdays it is open from 10:30 am to 22:00. The museum is closed on Mondays. For the lastest information about opening hours, please consult the museum's official website.

Is the entrance to Quai Branly Museum free?

Admission to the Musée du quai Branly is free for everyone on the first Sunday of each month.

Upon presentation of relevant proof, admission to the museum is always free for:

History of the Quai Branly Museum in Paris

The beginnings of the Quai Branly Museum can be traced back to the art dealer Jaques Kerchache and the former French President Jacques Chirac.

In 1990, the ethnologist and art collector Jacques Kerchache published a statement in a newspaper in which he spoke out in favor of a Paris museum dedicated to the arts and cultures of the indigenous people of the colonized areas. At this point in time, non-European art was considered “primitive”.

After Kerchache got to know Jacques Chirac, the then mayor of Paris, he was able to win him over to his cause. After his election as President of France in 1995, Chirac ensured that an exhibition on non-European cultures was permanently presented in the Louvre Museum. A year later, Chirac announced that a museum would be founded that would deal specifically with non-European art.

Despite numerous criticisms, the ethnological collections from the Musée de l’Homme (“Museum of Man”) and the former, later renamed Colonial Museum (Musée national des arts d’Afrique et d’Océanie) were brought together for this purpose.

The famous architect Jean Nouvel was commissioned to build the museum. On June 20, 2006, the Musée du Quai Branly was inaugurated by Jacques Chirac.

At that time, the concept of the museum "Where Cultures meet in Dialogue" was a sensation and developed into a model for museums around the world.

Around a hundred selected exhibits from the museum can also be seen in the "Pavillon des Sessions" of the Louvre.

Since opening, the Musée du quai Branly has hosted 118 temporary special exhibitions. With over 1.7 million visitors annually, it is one of the most visited museums in Paris.