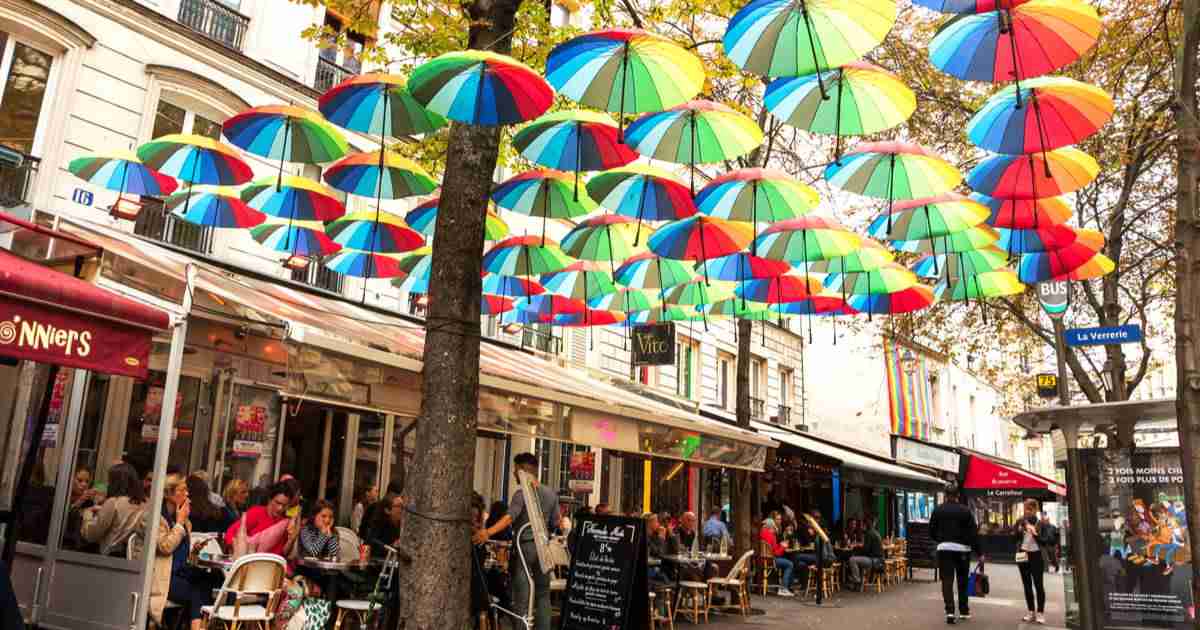 Welcome to Le Marais ! It is one of the most sought-after quarters of Paris by the travelers.

In fact, it is considered the most relaxed and trendy quarter of Paris, with a large LGBT community. The quarter has to offer very nice and unique restaurants and cafés, amazing street art and a heavy heritage with museums to explain the history of this area.

Let's discover together what makes Le Marais so special.

Note : If you want to discover more quarters of Paris, keep in mind that we have introduction articles to l'Île de la Cité, Montmartre Quarter and Latin Quarter too !

What is Le Marais Quarter in Paris ?

The name "Marais" (maresc in Medieval Latin) means marsh as this part of Paris was swampy until the middle ages. Then, the area was first converted into farmlands via building irrigation channels and extensive urban projects changed Marais forever, when Paris was growing in early 1600s.

Today's Marais is one of the most colorful and vibrant parts of Paris. It is known with shops and ateliers of arts, creative and elegant boutiques, charming drinking and dining places, LGBT-friendly nature, and last but not least, Jewish community.

The old-fashioned streets of Marais are full of more surprises like seeing the largest Picasso collection in the world and more...

Where is Le Marais Quarter ?

The area covers a triangle on the 3rd and 4th arrondissements along the Seine River. Its spacial limits are marked by the glorious building of Hotel de Ville (the City Hall in French), Pompidou Center and the renowned squares of right bank called Republic and Bastille.

Here is a map to locate Le Marais in Paris :

How can I go to Le Marais Quarter ?

Actually, Le Marais is a very central point of Paris. You can easily walk in a few minutes from the metro stations :

What can I do in Le Marais ?

The busy streets of Marais have a distinct character in central Paris. They are really pleasant to walk through, even without any attraction in mind. Several stylish shops and cafés make its visitors feel a touch of authenticity as well.

However, there are a few places about which you should know before going there. So you can pick a couple of favorites in accordance with your preferences, the time you have or the weather at that specific day.

First of all, there are a few museums with world famous collections or quite interesting themes. Additionally, a couple of historic corners of Paris will take you to.

Paris is absolutely the richest city with its treasures of art. Although the most famous ones are in Louvre Museum and Orsay Museum, there are several other good collections you can see. One of those places is Centre George Pompidou, which was named after a late president of French Republic.

Apart from the pieces inside, the building is pretty extraordinary. It is particularly unusual for a city with a certain style like Paris. Centre Pompidou, as an outlier, almost shocks a visitor with its strange outlook.

Most visibly, giant colorful tubes and pipes dominate the view. They are all functional and classified by color. More specifically, blue pipes are for air ventilation, green ones circulate water while yellows are for electricity.

Since its opening in 1977, Centre Pompidou has been housing a popular library and modern art collections. Especially, at the Level 5, there are major works by great artists of 20th century Paris such as Matisse, Modigliani, Duchamp and Picasso. Read more information about Pompidou Center in Paris.

Place des Vosges is one of the magical corners of Paris that could carry you back in centuries. Four centuries ago, it represented a new age in Paris as the first of planned square. It is a perfectly symmetrical square around which glamorous houses aligned with red bricks and white stones.

This place was initially called as "Palais Royal" because the intention was gathering King Henry IV, Queen Maria di Medici and the French aristocracy around them. The area in the middle were the stage for tournaments and festivals launched by the royalty.

When Versailles became the main royal residence, Its name was changed during the revolution when the royalty was abolished. The new name came from a region "Vosges" that was a supporter of the revolution by taxes from the earliest times.

Having a picnic on the grass or on a bench is really a nice treat in the spring or summer times. Otherwise, you could have a couple of drinks at the cafés around. Art galleries behind the columns might be quite enjoyable too.

The iconic writer of Paris lived in this Parisian square. Thus, if you have some extra time to spare, this is a perfect combination to discover.

First of all, you can see how a creative person decorated such a special apartment extravagantly. The bold and strong colors are in use on the walls surrounding Oriental and European style of furnitures.

Victor Hugo's personal items are still around here where he lived between 1832 and 1848. A pretty high writing desk grabs the visitors' attention as he preferred to write standing up. This one is where he started "Les Miserables".

You can feel here that the windows looking at the beautiful Place des Vosges could give you a new perspective about Paris.

A young painter called Pablo arrived in Paris in the year 1901. All things that turned this fresh talent Picasso happened in Paris as he went through poverty, tragedy, love, war, fame in decades. Surely, his masterpieces were taken to cities all around the world from Saint Petersburg to New York.

Still, the largest Picasso collection in the world remained in his own hands. When he passed away in 1973, French state claimed his collection for the taxes he and his family owed.

So, Picasso National Museum in Paris invites you to visit the most personal archive from different periods of the artist's life chronologically, including Picasso's lovers' portraits to his experimental sculptures and sketches.

Picasso Museum is definitely the celebrity of the district. But if you would look for another museum, our recommendation is Musée Carnavalet a few blocks away from here. Its exhibitions cover from the pre-history to modern times including French Revolution. Moreover, the entrance is Free !

Besides the exhibitions, the two museum buildings are stunning examples of 16th and 17th centuries civic architecture of Paris. Inside the Musée Carnavalet, there is a room dedicated to a resident, Madame de Sevigne. She is insider source of Paris historians for her numerous letters narrating in detail about Louis XIV's reign.

Read More : Find out about 10 free activities to do in Paris !

The painters became more famous here but Paris also nested the art of photography since its beginning. Maison Européenne Photographie (MEP) is one of the most prestigious venues in the world.

From their vast collection or a contemporary genius photographer, MEP might host up to 4 exhibitions at the same time. If you have any interest in photography, you better check the program here.

Marais has been containing Paris' main Jewish quarter since the middle ages as well. It is called Pletzt in Yiddish, meaning "little place/square". The charming Rue de Rosiers is also where you can see kosher butchers, bakeries and falafel shops. If you are into street food, L'As Falafel is always recognizable with the queue at its gate.

Museum of Art and History of Judaism

Hotel de St-Aignan is a 17th century mansion in Le Marais, where you can find Musée d'Art et d'Histoire du Judaïsme. It exhibits the heritage of Jewish communities mostly in France as well as in other parts of Europe.

Regarding the artistic part, there are paintings by Marc Chagall and Amadeo Modignliani are the most remarkable ones. From the windows of the museum you can see the garden named after Anne Frank. There are both audio-guide and guided-tour services inside the museum.

Tip : Check our Tickets Shop of Paris for more activities to do in the city !

Shoah means Holocaust and Memorial de la Shoah is a monumental installation bearing 76.000 names honoring all French Jews deported to concentration camps when Paris was occupied by Nazis during the Wold War II.

In addition to the monument, there is a library, a gallery and archives for the victims. In the crypt below, there is a tomb referring to the unknown martyr of the jews that symbolizes loss of 6 million lives because of this crime against humanity.

Nearby the museum, at 10 Rue Pavée, there is a synagogue designed by Guimard. He was a prominent architect for art-nouveau style at the end of the 19th century. His most-commonly known design is the classic entrances of metro stations in Paris. 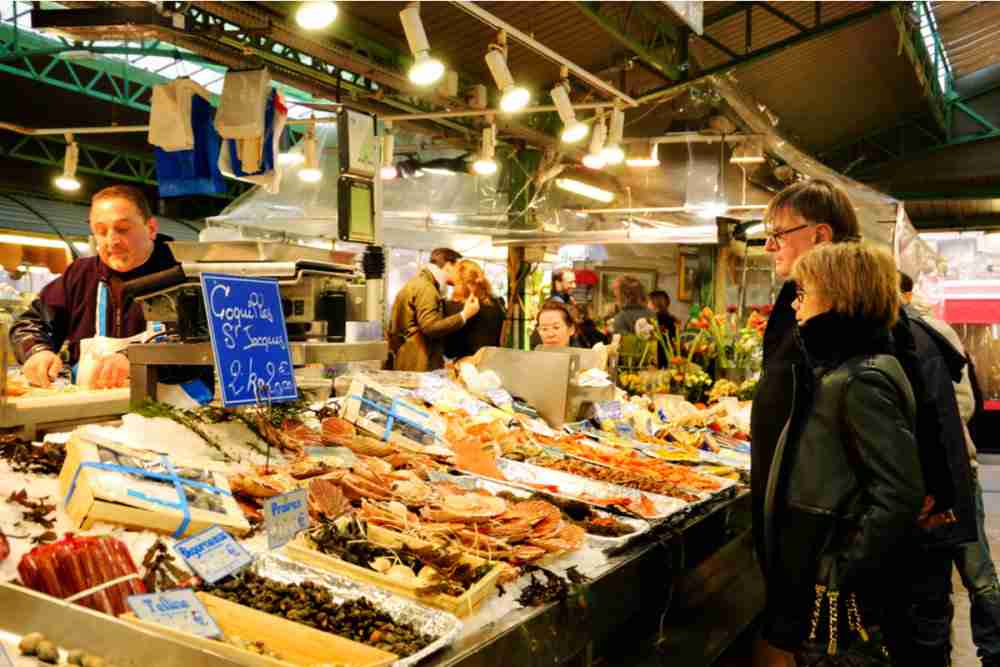 This is the oldest covered market in Paris. It has been open for more than 4000 years. Its name translates as "Red Children's Market" because of an orphanage nearby in the past. The kids were around in red clothes that is associated with charity.

This market is best advise for the food lovers and travelers always looking for locals-favorite places. The variety inside this market is really remarkable from Lebanese to Japanese eateries and from vegetables to seafood both cooked and raw.

There is no need for extra words for cheese... Parisians love it ! Another good point is that you can eat there or take away.

Tip : Read our guide of French Culture and learn more...

Here is a map to locate all these places :

Le Marais doesn't have any secrets for you anymore. Enjoy the ride and tell us what you prefer the most about this area of Paris !